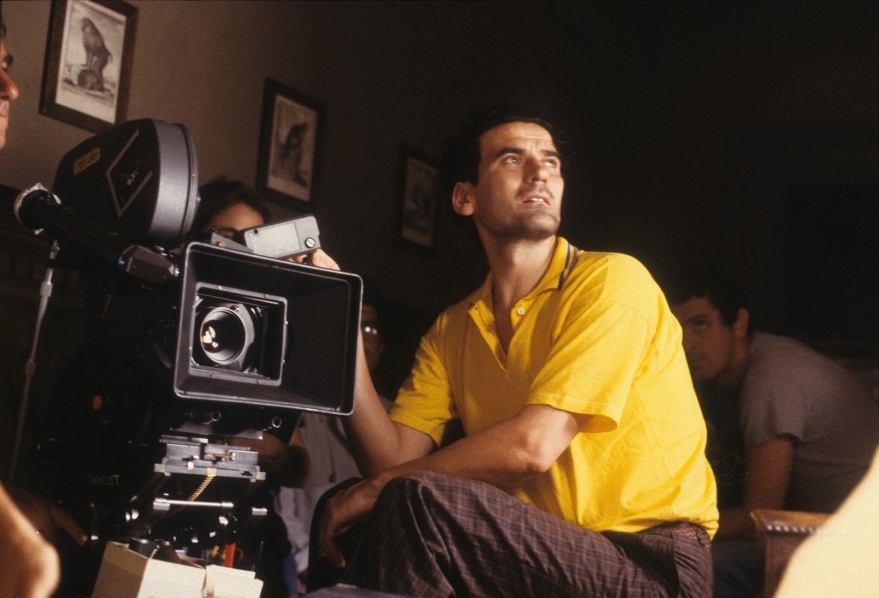 The world premiere of the documentary film “Massimo. Il mio cinema secondo me” was held at the Festa Internazionale del Film di Roma in 2013 at Rome’s MaXXI (National Centre for the Exhibition of Contemporary Art and Architecture). This documentary project intended to shed light on how Massimo Troisi envisaged his work: his role, his auteurial responsability and how he conceived both directing and producing.  This project was inspired by the need to document his artistic universe through materials and unpublished accounts and to more thoroughly explore who was behind the films and his artistic legacy, for all of us who had seen his work and those who had not previously known him.

This documentary begins with an interview dating back to 1993 for his graduation. He is seen telling a story in a relaxed and heartfelt manner, both sincere and thoughtful, without the typical caution of his later ‘public’ interviews. This leads the audience down a privileged path of introspection, with insights woven together from those who had shared his art, friendship and loves. His philosophy slowly emerges during this exploration and throughout the various interviews to reveal the more structured and profound approach of Troisi as Artist, rather than just the actor we knew best.

In his words: I initially have to convince myself that it’s worth telling a story, whether it’s about love, illness or friendship, or about power, [even] if it doesn’t say anything totally new, if that novelty isn’t there… then to force myself into looking at it from a new point of view’

We discover how meticulous and concentrated he was during the writing phase. His professional consistency. How he was fully aware of the progress, in form and substance, in any of his films. But also we discover the fears of a young artist after his overwhelming success.

In his words: ‘I’m still learning… For each film, I’m still looking to include those five, ten minutes of the previous film that I liked‘

Listening to his words the audience can engage with his own poetical sensibility and way of seeing film, and how he would put them into practice: whether it’s about what inspired him most, or about his relationships with all those collaborators (scriptwriters, actors, technicians, producers…) who shared those experiences.

In his words: ‘Sharing my unease, how difficult it is to abide with society’s, family rules…. Speaking in Neapolitan is ideological, like a defense, that too is not merely abiding with the rules…’

…’Speaking Italian would have meant not only betraying the Neapolitan [way], my culture, but the very idea of doing things differently’…

The documentary transforms a monologue-interview into a type of ideal conversation by including the contributions of other professionals and his collaborators’ recollections. Massimo’s own voice also alternates with that of Anna Pavignano, a one-time partner and co-writer of all his films:

In the words of a long-standing collaborator who shared all his artistic life and close friend who recognised both the value and teaching of this extraordinary experience: ‘… It was a total search for purity. Massimo taught us to look within solutions, for points of view that were absolutely extraordinary. He moved the bar up for all of us, he made us jump much higher than we ever would have and he made us get used to a plan of art and life and being together, but in an epic, ethical way…’ – Lello Arena, Troisi long term collaborator and Italian actor, comedian, television personality

In the words of someone who loved the work and studied his brief, yet intense, revolutionary career: ‘Troisi defends himself as a comic from being more serious, at the same time he manages to communicate something pure, or as he might have said ‘more authentic’. [To show something]… which he cares profoundly about’ – Mario Sesti, well-known Italian film director, critic and curator.

The narrative flow of the documentary is supported by unseen footage, exploring the locations from Troisi’s films and life, alongside the marvellous photographs by Mario Tursi animated and organised by the engaging and unique ‘motion graphics’ technique. To the musical accompaniment by Pino Daniele and invaluable reinterpretation of the song Qualcosa arriverà (‘something will happen’ in Italian) that his close friend and renowned fellow Neapolitan musician wrote specifically as an homage to his profound friendship with Troisi.